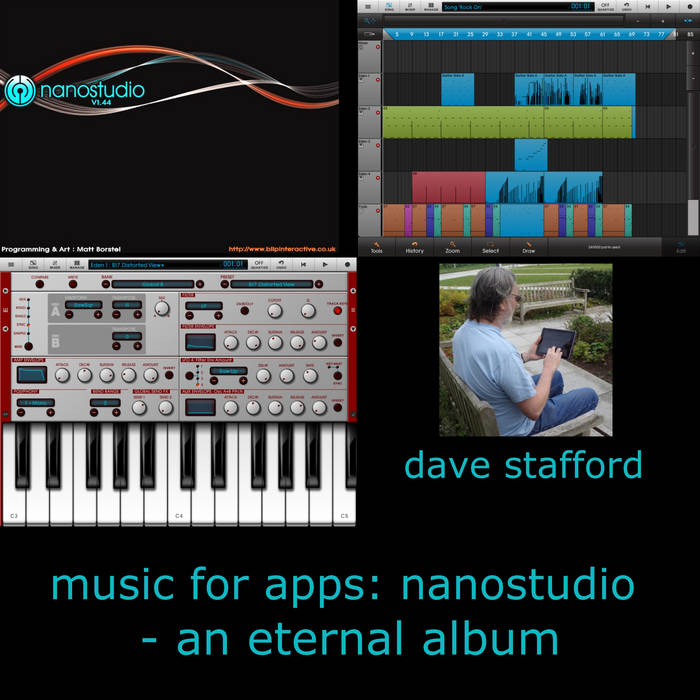 
this is the third of many dave stafford "eternal albums" to come - albums that have no finite number of tracks or end date. as time goes on, I will add more and more tracks (which will be at a special low price) with no limit on the number of tracks or the amount of time that passes.

I should note, for fans of my ambient music – some of the music made with this application resembles the ambient music I normally make; but some of the pieces may also be quite active; therefore, not like my usual ambient work – I will mark each track as ambient or active where possible, so: this album will contain a mixture of ambient and active tracks.

nanostudio is one of the very, very first applications I acquired, and I immediately fell in love with it – as midi studio apps go, it’s still one of my favourites, and I particularly love it’s internal synth, the “eden synth” as well as it’s very beautiful and realistic-sounding "TRG" drum sounds, and it has such a user-friendly interface – you can stack drum tracks and synth tracks to your hearts’ content, easily and quickly, and the sounds are great – it's a really well built app, and so easy to learn and use.

over time, I've created quite a few pieces using this app, and until the “eternal albums” came along, I struggled to find a forum in which to release them, so some of these pieces are seeing the light of day after remaining unreleased for many, many months indeed – some of these pieces were created and completed a long, long time ago, others are more recent; regardless of their age, it’s a very consistently good catalogue of music, and I think that the quality of the pieces is very solid over time – the pieces, if anything, get better as time goes on – always a good thing.

nanostudio allows you to create pieces using multiple instances of eden synths (as many as you care to add) and also allows note by note editing and other nifty and useful features – and I took my time when working with this app; tried to learn everything it could do, and in doing so, I've built up a reasonably sized library of nanostudio tracks, which are presented here for the first time ever. until today - no one has heard any of this music.

so sit back, and enjoy the ride, the joy of discovering the brilliance of the nanostudio application, and the unique music that can be made with it - from now until bandcamp is no more...

all instruments and sounds by dave stafford[


approximately four seconds of silence has been added to the end of each recording, to allow for any running order that you, the customer, desires (since this is a completely user-configurable album); this added silence in no way affects the quality of the tunes.

technical note: these are the unaltered original 44.1 khz 16-bit master recordings taken directly from a mobile device; and no additional effects or reverb (beyond the onboard effects native to the application) have been added to the tracks; in other words, no changes whatsoever to the natural sound of the eden synth samples, and the compositions they were used in, were made - this is what nanostudio sounds like, right out of the box.