once more (into the fray)

from music for apps: notion - an eternal album by dave stafford 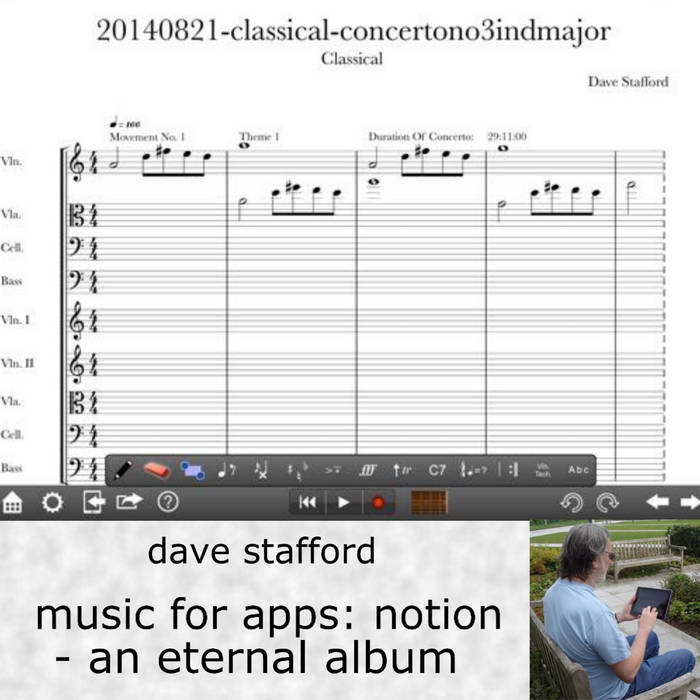 once more (into the fray)

seeing as my very first piece made with Notion, was an acoustic guitar duet, which I had really enjoyed creating (please see track 1, "notionally acoustic") I felt that now that I had some six months of experience notating with Notion, I wanted to do another such duet...

that was the first impetus, but I had another, second agenda; I wanted to compose a new acoustic guitar piece that would emulate the kind of pieces that I'd written back in the late 80s / 90s when I was working in the new standard tuning acoustic guitar duo, "The Dozey Lumps" - either solo pieces I'd written for the band, or more often, for collaborative compositions done with my good friend Bryan Helm (now my partner in the new ambient band "Scorched By The Sun")....the Dozey Lumps' repertoire, which was developed during the period 1988-1992 consisted of about 25 pieces, all arranged for two guitars - but the diversity in our songs, most of which were composed together, was incredible.

anything from a traditional picked guitar duet, to very strange pieces with really odd sections of guitar, played in unison, counterpoint, randomly, staggered, and many other indescribable sections of music tacked together with pure creativity, I realised that I had only really revisited the acoustic repertoire once, for my 1997 album "1867", which was a solo album featuring crafty acoustic guitar and loops, since then, I'd not written much music for acoustic guitar, I'd done some classical guitar work, but, I missed the drama of the music of The Dozey Lumps, the humour in our compositions, the fun of performing them, and the joy of writing them.

so I decided I would score a piece of Crafty acoustic guitar music, for two acoustic guitars, in the here and now, in 2014 - some 36 years after the first simple compositions of the Dozey Lumps in 1988 / 1989, but hopefully, closer in spirit to the more sophisticated pieces that we composed In the early 90s.

I began with some classic Crafty duetting, using primitive circulation techniques to give the piece that "Crafty" feeling, and I think overall, that I managed to create a piece that would be like the continuation of the Dozey Lumps' music, thirty odd years later, almost as if I had suddenly decided to create our next piece of repertoire, song number 26 if you will, for Bryan and myself to play - here in 2014.

Unfortunately, we are now separated by one very large ocean and half a continent, so a Lumps reunion is probably not on the cards...

however, I'd like to extend the offer to all Crafty Guitarists, wherever you are, I'd love to hear an NST band or duo play this, so if you'd like me to email you a copy of the score, please email me at pureambient@yahoo.co.uk and I will email a copy of the score to you, I would really like to hear any Crafty duos, casual, semi-pro, professional - record a version of this song, please just let me know.

I am particularly interested in hearing how two players manage Bar 177's rather quick rapid-fire circulation of alternating notes - I am sure there are several players who could pull this one off, but it would bring me real joy to hear your versions of 'once more (into the fray)' - meanwhile, we have the Notion version here to tide us over.

so - here it is, the next Dozey Lumps song, well, maybe not... but it is a Guitar Craft style acoustic guitar duet, and after all this time, I was delighted that this new piece, has turned out so well - I am very pleased with the results, and it was pure joy to work in this idiom once again - long live The Dozey Lumps and their unique style of composition and performance.