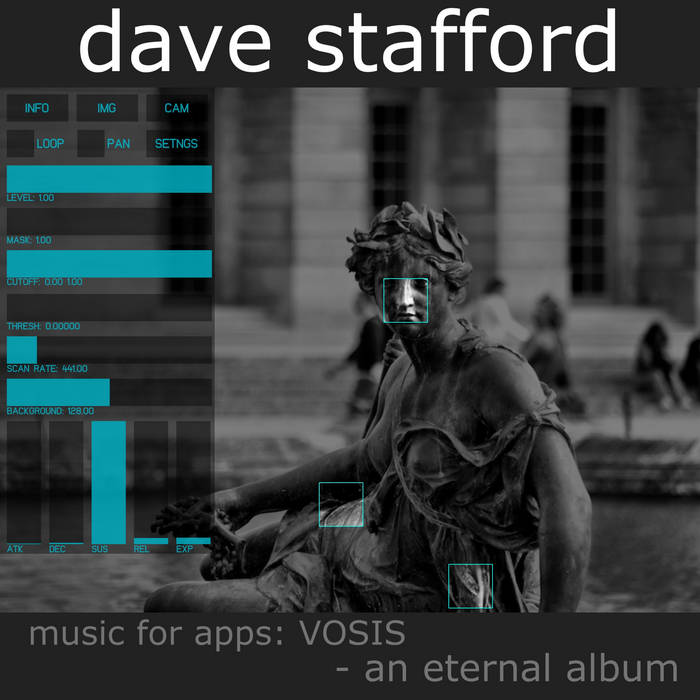 
hello and welcome to the newest eternal album, “music for apps: VOSIS".

sometimes, appearances can be deceiving. I have to admit, when I first downloaded the "VOSIS - Voice Of Sisyphus Image Sonification" ipad music application, I really didn't have particularly high expectations for it, based on it's appearance and avowed method of sound creation (image-based music?), but, once I began to use the app - my opinion changed - dramatically.

first, the app's appearance is quite strange, you are presented with a black and white image of a marble statue, with some odd looking controls at the left, and you realise gradually, that you are supposed to "play" the black and white image, and that indeed, it's the pixels, the contrast of black and white, that actually powers the sound engine.

so depending on the photo you use, you will get different outputs - or, you can turn on your tablet's cam, and use VOSIS against a live video input - making music based on the pixels in your immediate environment.

I immediately sat down and recorded my first four VOSIS pieces, and I have to say, it's a very, very satisfying process - and the only possible comparison I can make, is to the very capable TC-11 application - another touch-controlled app - but VOSIS goes one up on TC-11, TC-11 is just your fingers driving synths and arpeggiators, and controlling patterns, while with VOSIS, the music is triggered by one to three fingers touching your chosen image or video feed.

regardless of the process, it's the sound that comes out that really describes what an app can do, and the output of VOSIS is very satisfying, dark, ambient - although the very useful toolkit of parameters on the left side of the screen allows for a fair amount of sonic variation, you can keep things very dark and moody, or boost up the scan rate for a more active sound - which is such an odd idea, you are basically changing the way the touch of your finger or fingers interacts with a black and white image, with variations in the image's contrast creating variations in the music - that is pretty wild!

but - OK, it's "image sonification" - and I wouldn't have believed it, but not only does it work, but it works well - and even though it's quite different, I am very happy to add this app to my arsenal of ambient applications that includes scape, mixtikl, drone fx - plus my other touch-controlled beauty, the amazing TC-11 - and I hope to create many more VOSIS soundscapes, using different images and video feeds to create an endless variety of endlessly changing ambient sound - VOSIS style.

all sounds by dave stafford.