from music for apps: mixtikl - an eternal album by dave stafford 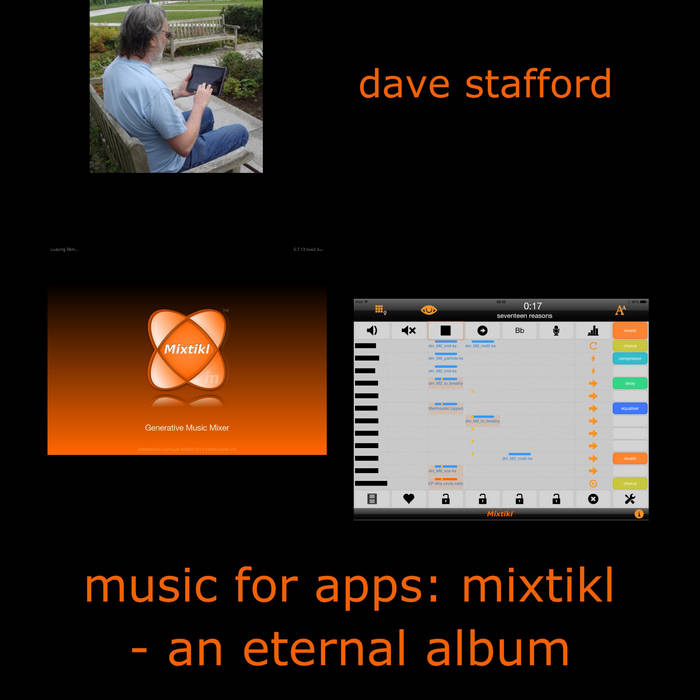 
this is the first of a series of active mixtikl pieces, which is pretty much wholly unlike most of the previous pieces I've created in the app.

ambient is my forte, and in creating many ambient mixtikl pieces up to this point in time, I felt quite comfortable, I have an idea how to construct the pieces…I pretty much know what I am doing (at least, to an extent!). safe territory, musically speaking.

so to suddenly jump in to totally, totally active pieces, featuring bass, drums, percussion and so on - well, I’m not really used to doing this on the fly, especially using a generative music creation tool to do so – but I took to it like an ungainly duck to a small pond, and I think “sandpiper calls” has a lot to offer.

it’s also a first, in that instead of just creating a loop and making a recording of it, I took several passes at it, building it up on the recording in a similar way to the way it was constructed. So you hear how it was “built up” originally, and also, I experiment with adding and removing elements of the mix as it plays, with some interesting results.

the stereo strings – left and right (these have a wonderful mellotron-like quality), and I love the way they fall across the stereo, too – and that awesome delay into reverb….

then, my matching guitar riff, which is designed to be used with the strings...

then, the ominous bass, which begins to climb over the existing samples…

then, the drums, fading in slowly, with that fabulous reverb – great room sound on this sample, love it.

then the second wah guitar, with a melody, but in reverb heaven…

then your prog organ part…(I didn’t expect this bit at all!)

then your second keyboard part…(nor this!)


then, finally, your beautiful overarching drone, the glue that holds the whole piece together…

until you have your song.

it was nerve-racking, doing this “live mix”, it took three tries, but in the end, I captured the build pretty well, I also take it down to almost nothing – the drums stop, the drone carries on, the strings and guitar even disappear briefly, leaving almost nothing – I love the super-quiet, super-ambient middle section, and of course, ambient had to get in there somewhere…

I am so glad I took the time to do this special, “live mix” which demonstrates how the piece came into being, and showcases certain samples by leaving them exposed during the experimental middle-section…the two wah guitar samples for example, which I think give this piece a sylvian/fripp feel, like “darshan’s” little brother sans lead guitars…

normally, I would never play a guitar part like that (despite a long love affair with the wah-wah pedal, and an admiration for isaac hayes’ “theme from shaft” – I just don’t play funk guitar) so being able to snatch these two fabulous samples (from the funk pak, of course!) and apply them to this track – was just so fabulous, they add a lot I think.

another quiet section near the end, as I reverse the build process (sort of); eventually, after a section with drone and string samples, ending up with just the two string samples – back to the beginning, again.


I must say, I am really pleased with this track, and how it came out, and I will definitely do more “live mixes” like this – it’s a nice process, which reveals some of the underlying samples better than a straight rendering of a completed loop does…