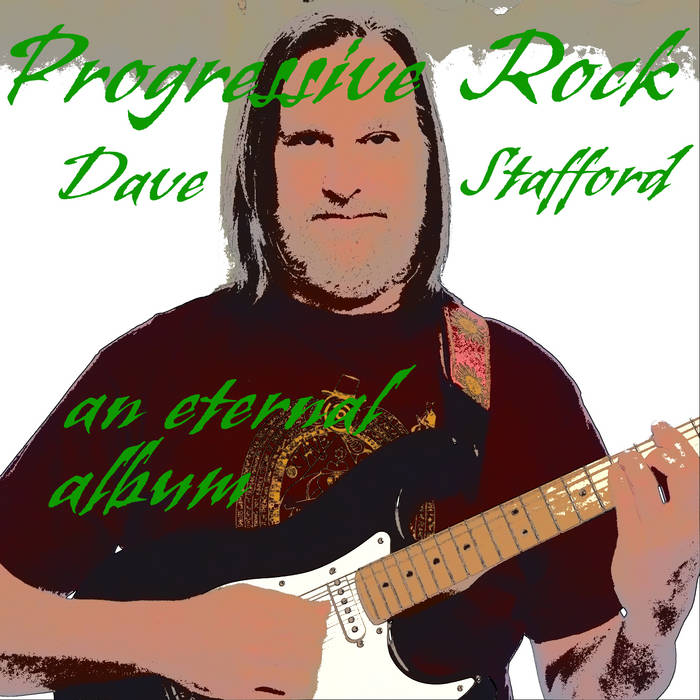 for the first eternal album of 2016, we've prepared something really special, for a very special kind of music: progressive rock, or "prog rock" as it is also known - or even just "prog" if you are really hard core :-)

I've always been a huge, huge fan of prog, all my life, and I was fortunate enough to see some of progressive rock's originals, back in the 1970s when I was a mere teenager. The second concert I ever attended was Yes, Tales From Topographic Oceans, in quad sound, that was in 1974.

over the next few years I was fortunate to witness concerts by Genesis (with and without Peter Gabriel), Gentle Giant, Strawbs, Rick Wakeman, Dixie Dregs, Frank Zappa, Be-Bop Deluxe, and many, many others - and that had a huge impact on me as I matured as a both a human being and as a guitarist (and keyboardist, and bassist, and drum machine programmer).

more recently, since moving to the UK in 2005, I was fortunate enough to pick up on some of the bands I missed the first time around - Focus, Van Der Graaf Generator (quartet and trio, mind you!), Gong, Caravan, and so on.

I loved prog then, but, I couldn't quite play it - well, I could play bits of it (and I annoyed my friends constantly with my very loud and very bad renditions of "Larks' Tongues In Aspic Part II" or "Easy Money" by King Crimson), I learned bits and pieces of the songs I love the most (I can still play "The Preacher, The Teacher" to this day - not that that has any real value!) but I couldn't really "do" progressive because I had neither the right equipment or the right chops.

so my long-held ambition to create progressive rock music just had to wait, and wait, and wait, mostly, until the year 2012, by which time, my equipment was finally up to the task, and my chops were getting there - they are always getting there! In the end - they get there. Often times, I literally do not know how.

on my 2012 CD "gone native" (SSCD1742 in the pureambient catalogue) I created some prog prototypes (it would not be until 2015 that I could create a full length progressive rock song with all of the truly important prog elements in it) and these few pieces were the beginning of my trek towards true progdom.

the first six tracks on this eternal album, then, will be "borrowed" from "gone native" (and I highly suggest that if you like the tracks, that you check out the entire CD, as the pieces really work well in the context of the original CD - it's how they were meant to be heard). buyers, please be aware, that these are the identical masters to those available on the "gone native" CD and the "gone native" download, so if you have them already, you do not need to buy them again! they are the same, exact tracks.

now, latterly, I am creating all of my eternal albums to be genre based, or in the case of applications music, by application groups. So, with the impending arrival of my first full-length piece of progressive music, which was completed at the end of 2015, on December 31, 2015 to be exact, after having been worked on since the end of May, 2015 - a full 7 months of gestation - but wholly worth it, and, since the new piece is finally done, the time has finally come to make that long-awaited album of progressive rock a reality.

so that this new piece would have a "home",here in bandcamp, I decided to set up this new "eternal album" using the few existing pieces of prog that I do have, all borrowed from the "gone native" album (which is available on CD or as a download) of 2012.

so the tracks from "gone native" represent a scene-setting, if you will; my first attempts at recording music of a truly progressive, creative nature, and then, once "the complete unknown" is added, I will have come full circle, and you will be able to hear the progression (no pun intended) from the shorter, somewhat less strictly progressive tracks from "gone native", to the full-length prog / musical glory of "the complete unknown". historical note: this is a record that no "rapper" or "sampler" could make, because it involves the playing of real instruments by an actual musician :-)

It's not often that one track causes me to create an entire album, but it has been known to happen before. I am also taking this as a challenge, to find the time to create more pieces of a progressive rock nature, to make this eternal album more complete over the coming years - so I will do my best to continue to add tracks to it as I am able.


I will say one thing, which is that I never for one moment envisioned that I would actually be able to create proper progressive rock music - because basically, my musical career kinda took a very, very left turn in 1988, when I started both Guitar Craft, and, around the same time, started looping guitar in a most serious way.

those two events changed me, the former, a huge, huge change, that is still going on now in 2015, and the latter, well, ambient and looped guitar became my watchwords for many years, and that was all I played - looped, ambient, and / or improvised music.

I was the antithesis of a progger, I was minimal, usually just one guitar and a looper (or two) and I very, very rarely did "double tracking" or created anything that wasn't live and in the moment. everything had to be "live", or improvised, or, preferably - both :-).

but, as time went on, and the equipment became better, and I could, for example, create proper drum tracks, and proper bass tracks (something I struggled with in the early years - is now solved by solutions such as Komplete) - once I had that, the rest came quite naturally - keyboards, acoustic guitars, electric guitars, lead guitar, ebow guitar, guitar synth, (and let us not forget, Kaossilator or Kaoss guitar!) and so on - I had, finally, all of the tools, and hopefully, skills, to make this record.

the first part of this record then, was originally realised in 2012, as part of the "gone native" CD and album project, the rest, during the long build of "the complete unknown", which was ran for seven long and difficult months of work, from May 31, 2015 through to December 31, 2015 - completed at the end of December, 2015 - all seventeen minutes of it!

that's why it's most fitting and most pleasing, that this eternal album be released now, at the beginning of a New Year, the very first eternal album of the year 2016 - and, a new beginning for me as a viable progressive rock artist - albeit a solo artist ! - as well as being an ambient looping guitarist, I am also, now, at last - a progressive rock band. albeit, a band with just a single member, who plays all of the instruments himself (thanks to Todd Rundgren, who helped me to see that this is possible). If you can't hire or find the band that can play your songs - just record all the parts yourself!

I hope you enjoy these tracks as much as I enjoyed creating them - this is the music that I always, always wanted to play; I never dreamed that I ever actually would do it - but here it is - progressive rock, dave stafford style.