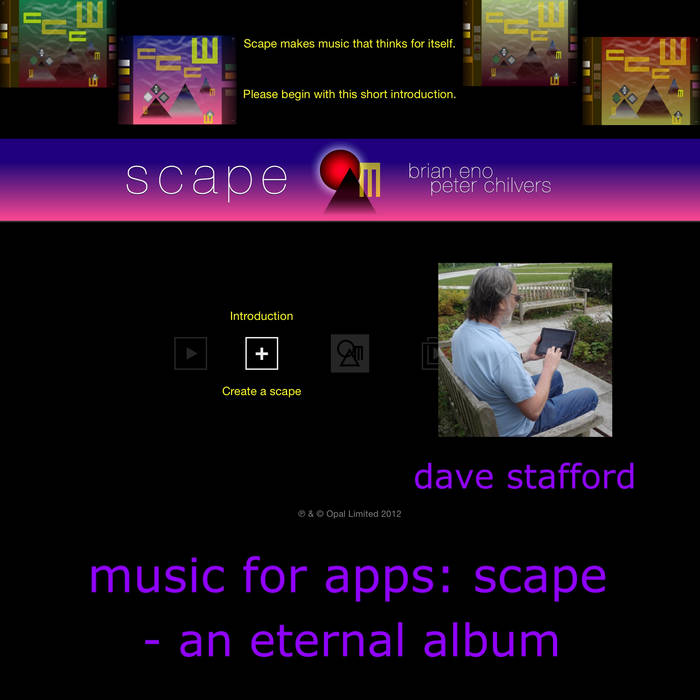 the first of the eternal album series to reach the 100 tracks mark! I would never have dreamed that in just a couple of short years, I'd have albums containing 100 tracks! but that's the nature of music for apps; it's created very quickly indeed, so being prolific, when you work on an iPad, is much easier than when working in the studio with "real" instruments. so this makes albums with 100 tracks, or, 1000 tracks, possible, even likely - and I think that is really cool! I hope you will think so too !!


note: each scape comes with an utterly unique piece of "scape" track artwork, included free with the download price. these are unique because they are the actual images that I created, to make this music, so, the track art for scape 1, is the image that I drew and then played back when recording scape 1 - the individual scape artwork, with it's colourful objects, backgrounds and filters, is actually what creates the music - and every one is unique - included for free in the special low price.

this is the second of many dave stafford "eternal albums" to come - albums that have no finite number of tracks or end date. as time goes on, I will add more and more tracks (which will be at a special low price) with no limit on the number of tracks or the amount of time that passes.

this is mostly ambient music, with the occasional active or dissonant track, but "scape" is designed to be a generative ambient music making application, and making ambient music is what it excels at. brian eno and peter chilvers did a great job designing this app, and it produces consistently beautiful ambient results even with many disparate input approaches - it's almost impossible to make a "bad" scape - which is fortunate indeed.

what you can do is experiment endlessly, and build new visual configurations that attempt to influence the output of the app - using the tools you know the best, you can influence how melodic, how busy, how sparse, etc. your piece of music is. I've also found that you can really, really load up scape with many, many instruments, and it still produces a listenable output - no matter what you do! I have created many, many scapes over the past many months, and I am constantly amazed at what you can achieve with this application if you are patient.

it is certainly one of the most interesting of my own personal musical experiences, and scape is also one of the most intuitive, musical applications I've ever encountered - being able to create new music using the musical DNA of brian eno - impossible, unlikely, difficult to believe - but there it is - and it works beautifully.

the ability to create music using a wholly visual approach is one that takes a little getting used to for a "normal" musician, but once you get acclimated, the possibilities are just about limitless - and I can listen to the music that scape produces all day long without ever tiring of it's sound, which contains so much of the "signature" ambient sound that we all recognise from the recorded works of brian eno - plus, new sounds and the ability to run tracks through effects and filters, too - they have pretty much thought of everything with scape. of course!

I can easily and happily assert that scape is the single finest generative ambient music creation tool in the universe at the present time (2013) - at least, until eno and chilvers create a "next generation" application - which is entirely possible.

I should note, for fans of my ambient and loop music: in the main, this is an ambient album; with occasional tracks that border on the active and / or dissonant - it mostly resembles the ambient music that I normally make.

so sit back, and enjoy the ride, the joy of discovering the brilliance of the scape application and the unique music that can be made with it - from now until bandcamp is no more...

note: each scape comes with a free, unique colour drawing (free track art), that was used to create that track - so the track are for scape 17, is what creates the sound of scape 17 within the application - a very clever idea - merging the act of painting, with the art of generating music.

technical note: these are the unaltered original master recordings, newly re-mastered beginning in summer, 2013. these new stereo masters were transferred with no alterations, and no effects or reverb being added to the tracks; in other words, no changes whatsoever to the natural sound of the samples, and the compositions they were used in, were made.

approximately four seconds of silence has been added to the end of each recording, to allow for any running order that you, the customer, desires (since this is a completely user-configurable album); this added silence in no way affects the quality of the tunes.