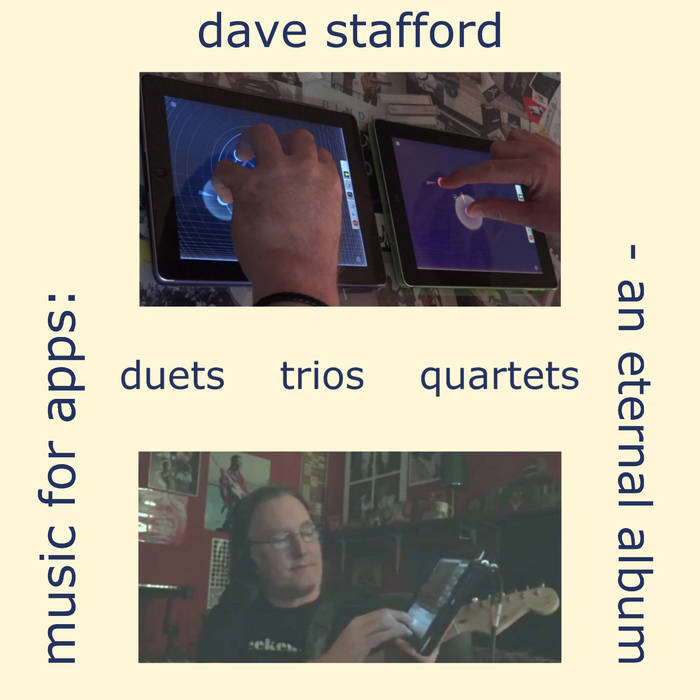 
hello and welcome to the eternal album, “music for apps: duets trios quartets".

this album will, over time, house many representations of the more spontaneous, improvised music of dave stafford, but in particular, in the form of duets, trios or quartets - with myself playing all the parts, of course - live.

the first session to be featured here on the “music for apps: duets trios quartets" eternal album was recorded very spontaneously indeed, in fact, I was testing out various systems in the studio, and I began to improvise a tune between two instruments that I was testing.

I just kept going, and in a very short time indeed, I had recorded five rather interesting live tracks, one hand on the new iProphet application from arturia, the other, on one of my favourite instruments of all time, the korg kaossilator - known more fondly as "Pinkie" to me - a remarkable device that I do plan to record more with in future.

this album gives me the opportunity to quickly play live duets, trios or quartets, capturing that spontaneity that we all crave so much, and present them hopefully, not long after they were performed. it remains to be seen how this album may develop, I don't have any particular restrictions on what instruments or what apps can be used, in fact, I think variation is very important, and while most of the eternal albums focus on solo works, or live works, played on a single app or pc softsynth, on this case mixing and matching will be the norm.

for you purists out there who may have noticed that while the album's title is "music for apps: duets trios quartets - an eternal album" - that in fact, I am planning on including at least two instruments that have nothing to do with "apps" or applications, at all - the remarkable korg kaossilator, and any number of interesting softsynths, from the m-tron pro mellotron to bazille to just about anything that I fancy - the rules have been "relaxed" for this album, and, to be fair, most of what I will use will probably be applications anyway. I could not in good conscience make the album title include "and kaossilators and softsynths and..." so I chose what the majority of what will probably be here, will be - applications :-)

in cases where I perform live duets using two or three instances of the same app, then I will continue to populate the appropriate app with those recordings - as example, I've done a series of duets, between tc-11 and another instance of tc-11, and once I have the time to upload them, they will be uploaded to the "music for apps: tc-11" eternal album - rather than the “music for apps: duets trios quartets" album.

the reason for that is simple - if the sole instrument involved in a performance is one instrument like the tc-11, it only makes sense to put not just solo performances, but also, any tc-11 duets, or other multiple performances using more than one instance of an app, onto that app's album - whereas here, on the “music for apps: duets trios quartets" eternal album, I plan on using unusual combinations of instruments, such as kaossilator pro v. ipad app iProphet, in other words, performances using unique and unusual combinations of apps, kaoss pad, or even softsynths - whatever it takes to come up with something bright and new.

I hope then that you will enjoy this channel, and as always, there are more on the way over time, I am never sure what might come next so I will be as surprised as you are, of that I am certain.

I certainly never expected this album to be the next in the series, but I'm both glad and grateful that it is.


technical note: approximately four seconds (or more) of silence has been added to the end of each recording, to allow for any running order that you, the customer, desires (since this is a completely user-configurable album); this added silence in no way affects the quality of the tunes.

...involving interesting combinations of instrumentation. the individual song listings will provide the specifics of how the sessions were prepared and performed, including the combinations of instruments / voices used on each song; while here in the album credits area, we will simply continue adding in each new individual instrument to provide an "overall view" of the instrumentation, and the voicings, that were used on these pieces.