from music for pcs: komplete samples - an eternal album by dave stafford 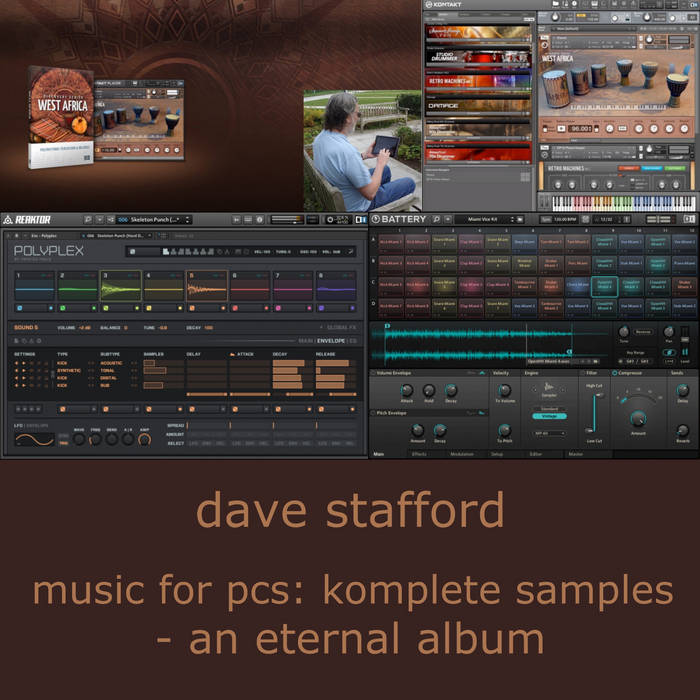 
my first foray into the world of the gamelan, and since I have absolutely no training or any idea how to play the instrument properly, I really sat down and took my time with this piece - working on it over a period of about 7 days, until I was finally happy enough with the results.

it took three mixes before I was satisfied, mixes 1 and 2 revealing flaws that had to be dealt with, but after suitable repairs, and changing one crucial overdub from one idea to another - "bird of paradise" was finally born.

since I am utterly unqualified to play gamelan instruments, I approached this as if I were both adrian belew and bill bruford, opening up a show on the 1982 tour with a fantastic improvised duet on a massive two-sided marimba.

so that was one influence, king crimson, the intro to "waiting man"...the other influence is perhaps a bit more obvious, by sheer coincidence, just prior to the recording of this piece, I had spent the previous two or three weeks utterly immersing myself in the world of gentle giant ("scraping the barrel" style, no less) which includes such amazing delights as a 25 minute "perfecting 'so sincere' session" - and other sonic prog delights.

so with the songs of gentle giant ringing in my brain - I composed and performed "bird of paradise" using four instances of the brilliant sonic couture plug in for gamelan instruments - I wanted in particular to be able to blend the brighter, sharper "gangsa" instrument with the duller, more xylophone- or marimba like "kettle drum" instrument.

in the end, because there are either three, or four, gamelan instruments playing at all times, such subtleties may be a bit lost, but I think this mix, which has the very lightest of compression and reverb added (maybe the lightest touch of reverb I've ever added - 9 percent) is the best way to represent the performance.

definitely one that you could play alongside gentle giant, and in a way, I was imagining a gamelan ensemble or orchestra, trying to create their own "tribute to gentle giant" - and on that level, I do believe, to some extent at least, it succeeds quite well.

it was an absolute joy to make, sonic couture, as always, make the most beautiful instruments for kontakt, and they have really done a beautiful job of sampling the instruments and preserving their natural sound. it felt wondrous to me, to be able to work with these sounds, these rare and delicate instruments - and their beauty pretty much speaks for itself.

I will say, when the piece reaches the three and a half minute mark, and the approach moves from purely melodic / harmonic, to partial "chords" intermingled with melodies and harmonies - those mini-chords, I think just sound amazing, the way the notes "ring together" is out of this world, creating some of the most amazing natural overtones I've ever heard. this effect is particularly evident on the final chord, which I truly wish could just go on forever and ever and ever - I could listen to that sound for hours on end.

however - you get about five seconds, but those five seconds are arguably one of the most beautiful moments in any of my songs, across my career - and it's moments like that, that we wait for and hope for.

'bird of paradise', while it could never be as beautiful as the birds themselves, I hope it at least evokes thoughts of bali, of the deep jungle where the birds of paradise live, and the uniqueness of those amazing avian species - there is nothing on earth quite like them.

so I honour them with this tune, using the music of the people of one of their homelands...