from music for apps: gadget - an eternal album by dave stafford 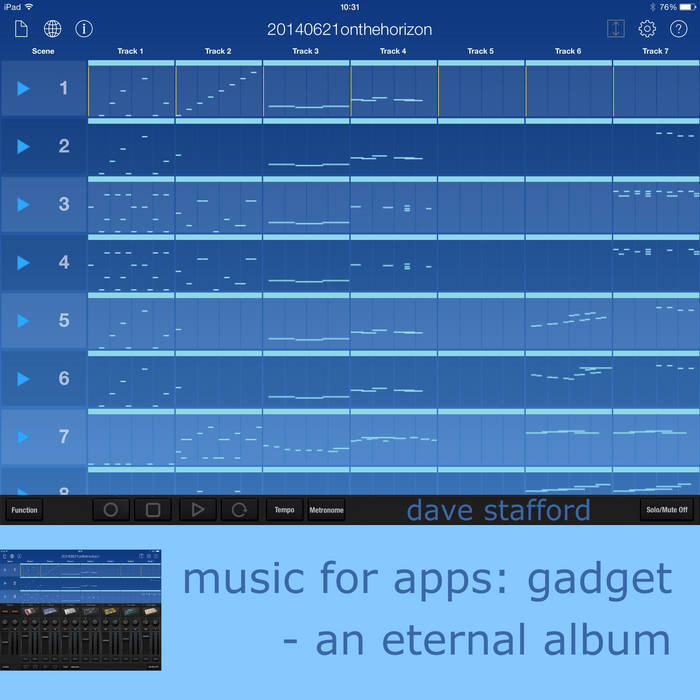 
for full details of the genesis and creative process behind track 7, "fair play", the original version of this song, track 8, "fair play (advanced version)", upon which, obviously, it was based, please visit my blog at:


where I discuss the detailed process behind this progressive rock tune in two different blog entries:

"fair play" is the original version of the tune, completed in early February, 2015, and is track 7 of this album. this new variation, was begun on the day that the original version was completed, and slowly, over time, as promised here then, it was developed, with the working title "fair play - advanced version", which has remained unchanged, so it's also the track's final title - this is an alternate / mutated / advanced version of the original piece you hear as track 7, "fair play".

this track, "fair play (advanced version)" is exactly that - a modified, mutated, extended and radically altered" version" of the original. I had no issue with the original track, but I had a dilemma - I reached a point of seeing where I realised that the original track was complete...

...while at the same moment, I could see this new "version", clearly, I could see whole new musical vistas opening up - using "fair play" as the basis for a "new track" - so I simply took a copy of the session for "fair play", within gadget, duplicating it exactly - and then, started....adjusting it.

I published the original version here, and I've been working on the advanced version ever since. The particular differences between the two tracks, are absolutely too detailed to try and document here, and the best thing to do, is to play the tracks one after the other, and try to figure out for yourselves what the differences are.

I can certainly point out some of them, perhaps the most obvious difference, is the fact that "fair play (advanced version)" is a full one minute longer than the original "fair play" - and that was for a number of reasons: I made decisions that involved duplicated bars, so I might have decided that in the original, I played bar 17 once, but I wanted to repeat it - so I would.

small sections that I was particularly fond of, were also copied and inserted at different points in the tune.

brand new material appeared, or rather, copies of existing bars with new tracks or solos atop them, and was added at various points.

and finally, both the beginning (which is now quite ambient in nature) and the ending of the song were extended and altered, so by the time I was done with all of that - the song had grown, very organically over several weeks' time, from 4:04 to 5:04 in length.

I did not intend particularly to extend it, but a number of the tasks that I set myself, and a number of the ideas I had for making changes, alterations, mutations, etc. meant that the song just grew a bit - not much, but I like the fact that it has, because it does give it a distinctively different "feel" to the original.

I will leave the rest of the details to you, there are many indeed, and I think it's only fair to call it the "advanced version" because it truly is advanced, so much has been altered, albeit a lot of it, quite subtly - for example, in some measures, all I might have done, would be, to move the bass drum from the 1, 3 and 4 to the 1, 2 and 4 - small changes such as that.

but also, massive changes, and the introduction too, of more ambient ideas - which I really enjoy that aspect of this new version, too.

let me know how you get on - I had an absolute blast working on both of these tracks, but I have to say, it was probably this one that I enjoyed the most - because I got to do even more far out, proggy things, and take more solos, and all the things that I didn't particularly want to "do" to the original version.

I am so very glad, in this case, that I decided to create the two different versions, completing them was both immensely rewarding and intensely satisfying, and the new instruments, courtesy of korg module - having real grand pianos and real organ sounds - was a huge contributor to the success of these "new look" gadget pieces - what a fantastic upgrade that was for the already impressive "gadget" application.

I can see a long future of working on tracks in this most excellent application - I hope you will come along for the ride. see you next time....

including three of the new instruments from the korg module application