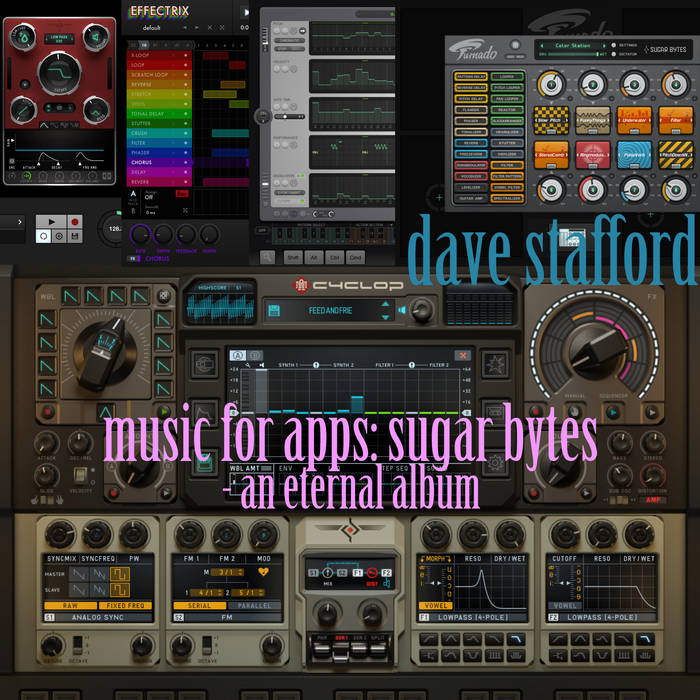 the sugar bytes family of music applications, and, of spectacular designed-for-ipad audio effects units, is simply one of the most remarkable on the ios. the quality and brilliance of their apps is widely appreciated, and the apps they make are at once instantly recognisable and tantalisingly beautiful - not just music apps, but - programming works of art.

it's impossible to know where to begin, sugar bytes gives us an absolute embarrassment of riches when it comes to the sheer breadth and variety of sonic mayhem and madness that you can create with their music apps, and the additional warpage you can accomplish with their top class effects units is remarkable.

hot of the press is my personal new favourite, "cyclop" - the most incredible bass synthesizer ever built for the ipad - it wipes the floor, the competition had no chance. this thing can out-bass any other bass app in existence - and it's incredibly beautiful to look at, too.

that's a new sugar bytes app, but going back a short ways, we encounter many, many other very worthy musical tools, such as
thesys, which is a fantastic app, a brilliant MIDI step sequencer, with a lot of very advanced technical features, too, that I have had the pleasure of working with for some time now, and I felt that it was a great candidate to get us going in this new year - so our initial upload features three tracks made with thesys, which is an absolute blast to play: it's very intuitive, and there is a lot of instant gratification to be had, you alter parameters on the screen - and you hear the results immediately - a true joy to play.

moving over to the world of effects, which is where I started, my first sugar bytes was the absolutely incomparable "turnado", which lets you play up to eight mind-blowing effects simultaneously, and some of these, on their own, just one effect, are incredible just in themselves - when you combine eight of them, you get some incredibly wild combinations - trust me. more presets than you know what to do with, including some amazing designer presets, you also have the famous sugar bytes "dice" - so you can just roll the dice, and the app will randomly set the eight devices for you! I could just listen to those effects combinations, randomly created, all night long - it's fantastic!

never one to rest on their laurels, sugar bytes then basically, beat themselves at their own game, turnado was a game-changing piece of tech, but their next entrant into the world of ios, effectrix, is a world-changer. it's so unique, and so forward-thinking, that it is actually almost difficult to describe! it gives you up to fourteen different effects, which you can actually, have all fourteen going at once should you really want to, but the beauty of this app, is that the effects are shut on and off, like crude automation, using strips of colour to denote when you want each effect to work, or not - so while your loop plays, effects are switching on and off, in combinations, set by you. I've only seen this in one other application, which is adrian belew's new application, which features an effects sequencer - that is essentially what effectrix is - and it's an awesome beast to play with - hugely creative, and hugely fun - between turnado and effectrix, you can make just about any effect or effects combo you could ever dream of - and, there is fairly deep tweaking available, especially in turnado - you have control.

then we have the specialist app: wow. this app does one thing, and only one thing, but, it does it incredibly well. it's a modulator. hence the name, "wow" - and this is a deep tweakable phaser, flanger, chorus that features deep, thick, beautiful sounds - a delight to use, and another truly successful effects app from the brains at sugar bytes.

if you are running in the full version of audiobus, you could conceivably have wow, effectrix and turnado effecting the music you are playing - and that might be an amazing sounding session. wow is a fantastic modulator, and while it's perhaps the more under-appreciated of the sugar bytes effects app, it packs a modulation punch that is equally impressive as what turnado and effectrix can do - it does one thing - but it does that one thing, really, really well!

based in germany, sugar bytes also make incredible PC music software, and a few titles straddle the PC / ios bridge and are available for both ios and the pc. all of their products are truly innovative, high quality, and I urge you to check them out if you are a serious electronic musician of any kind - like me, you will fall in love - this gear is strictly brilliant, definitely fantastic in every way. Every time I pick up cyclop, I find that I just can't stop playing it...I can't stop!

over time, we will feature each and every sugar bytes application that we have in the studio, at the moment, we're working only with apps, so that's what you will hear here - strictly the ios apps - and that, I can assure you, will absolutely blow you away - sugar bytes know the audio business, and their ios apps look to me as if they have come from the future - so, the future would seem to be here - right now!!!!

sugar bytes are a remarkable company that makes some of the most stunning and innovative applications in the world of (ios) music today.


nowadays, generally speaking, anyone making music on an iPad or even an android tablet,, is probably using audiobus, to chain together different musical tools, in the input, effects, and output slots; I am no exception to that, it would be a rare day when I record an app outside of audiobus. and I also use the excellent audioshare, sometimes to record the output of audiobus, or for file movement - audioshare (with dropbox, for example) is a very useful utility, and I think an essential one,

what this means though, is that it's no longer a completely straightforward situation - when I first started working exclusively with the ios music applications, audiobus did not even exist, so setting up a chain of instruments was makeshift at best. so often, it was just easier to record an application on it's own; use it's own effects if possible, or run it through a hardware or software reverb once it's off the tablet.

how sugar bytes was able to create such a remarkable suite of powerful musical tools in such a relatively short time, I am not sure, but I can tell you, it's made me a very happy boy indeed. so when it came to working with thesys, the limitations of the 2011 ios, are now gone, and in one live session, I can use thesys itself, as the powerful source of extremely mutate-able sounds - even on it's own, what comes out of the device, is pure genius - but just wait for some of the tracks I will be uploading in the future,..

I was able to combine the power of thesys, with effectrix, turnado and wow - and running something with as complex of an output as thesys boasts, through no less than three ultra powerful effects applications - and the sound of that, can become pretty intense and pretty amazing, too.

so thank god for progress, because the existence of audiobus, as well as it being one of the most innovative applications ever created, has created this scenario that has allowed musicians to combine the power of three or four intense applications at once, which musically and technically, gives us new sonic worlds previously unimaginable, while the creativity that combining interactive applications, and the flexibility of audiobus, gives us the ability to manipulate our set of four or five powerhouse music apps, as it's being recorded - so you can sit with effectrix open, and effect the whole track with it, and then switch back to thesys, and alter a playing sequence, then jump onto wow to mess with the filter in real time - and do it all "live" as the system now permits,

this was simply not possible three years ago, so the addition of audiobus to our musical arsenal, has really changed things for everyone, for the better - and, I really can't wait to see what new innovations appear over the next couple of decades..

in the meantime, I hope you will enjoy the beginnings of the "sugar bytes" eternal album, starting with three early tracks done with thesys, which, by the way, feature effects from turnado and effectrix, so you will hear a bit of those as well in these first tracks, and moving forward into the future, we will be using the sugar bytes instruments and effects in varying combinations, which will demonstrate further what these remarkable instruments and effects can really do - world-changing tech.


and now to the music!

all sounds by dave stafford.


technical note: approximately four seconds (or more) of silence has been added to the end of each recording, to allow for any running order that you, the customer, desires (since this is a completely user-configurable album); this added silence in no way affects the quality of the tunes.

finally - thank you for listening!

audiobus output recorded with, and files managed with, audioshare; from Jonatan Liljedahl of Kymatica - a fantastic utility.