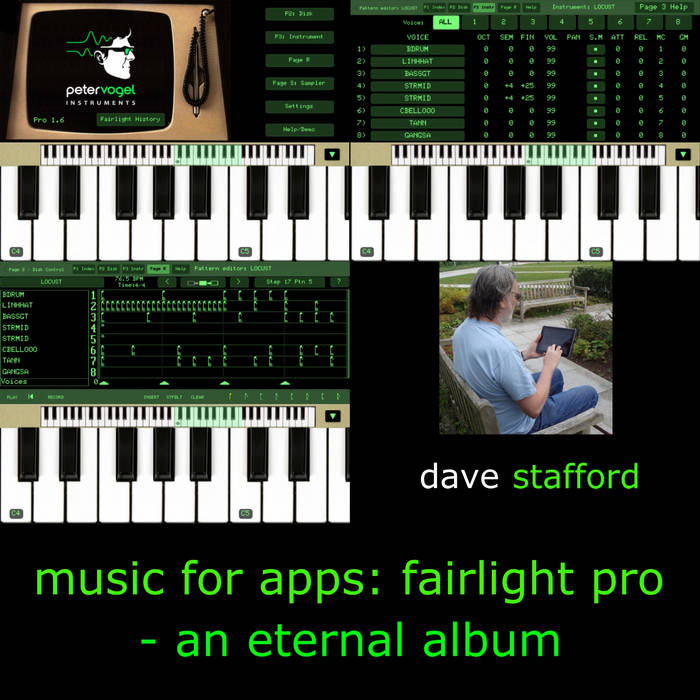 
this is the first of many dave stafford "eternal albums" to come - albums that have no finite number of tracks or end date. as time goes on, I will add more and more tracks (which will be at a special low price) with no limit on the number of tracks or the amount of time that passes.

I should note, for fans of my ambient and loop music: the music on this album is in the main, not ambient. it's made on the application version of a very famous 1980s sampling synthesizer that is available as an ipad application, and it's just one of my many, many varied musical outlets, featuring work that is perhaps somewhat atypical of the ambient and loop music I "normally" make.

sequenced on a tired old ipad 2, beginning in february, 2012; continuing until bandcamp no longer exists.

so sit back, and enjoy the ride, the joy of discovering the brilliance of the fairlight pro application, and the unique music that can be made with it - from now until bandcamp is no more...


technical note: these are the unaltered original 44 khz 16-bit master recordings, newly re-mastered during summer, 2013. these new stereo masters were transferred with no alterations, and no effects or reverb being added to the tracks; in other words, no changes whatsoever to the natural sound of the fairlight samples were made.

approximately four seconds of silence has been added to the end of each recording, to allow for any running order that you, the customer, desires (since this is a completely user-configurable album); this added silence in no way affects the quality of the tunes.